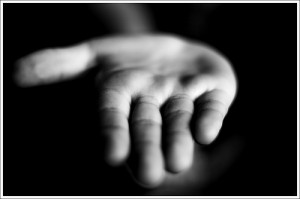 The darkness and light of the never-ending questions.

Parenting is a marathon effort. Some days you’re running alongside your children and others leave you standing on the sidelines. Watching those stages from baby to toddler, child to tween and those awkward spaces where your teen suddenly emerges into adulthood and then casually slips back means you are constantly running to catch up with their changing needs. You walk that fine line between encouraging them to grow and then wanting to shield them from the tough stuff.

During the long school holidays I took my older girls – 8, 12 and 14 to see Saving Mr. Banks. A PG rated movie whose previews suggested a jolly old story behind a movie that’s on high rotation in most houses, and the houses of many parents as they grew up – Mary Poppins.

Once the popcorn had been purchased and the last pit stop to the toilet taken we settled down in the dark waiting for the familiar show tunes to pipe from the speakers. As the movie stretched on the darkness and light that sits behind that classic PL Travers novel – who quite proudly grew up in Australia – started to unravel and with it I began to squirm in my seat.

Saving Mr. Banks was inexplicably sad – telling the story of an enquiring little girl managing the harshness of rural Australia and the love for a Dad who just quite couldn’t get there some days. It explored the impact of alcohol use on a family, physical illness, mental health, death and what happens for those on the sidelines when the pressure of caring for three small children with an absent dad pushes people to their limits. My eight year old spent a lot of time whispering across asking what was happening, why the mum was crying so much and why the Dad was behaving like he did. I answered as best I could in hushed tones and asked her to wait until afterwards where we could chat in peace.

Raising children involves a lot of stimulating conversations . They are discussions that we plan for, that we try to up skill ourselves about in order to show them that the way we cope with life can transform our ability to get right back up when we fall down. They help to teach our children that to be human is to live with both the ups and downs, all at the same time.

Families often ask about the right way to answer the questions that sit on the periphery of our experiences. In working with families and in raising my own it can be helpful to ponder the following ideas:

As our children grow older and life transitions from G to more PG rated ideas the inevitable questions about how the world functions come along for the ride. Taking a breath, finding a way to respond to their inquisitive minds can teach you about the marathon journey you are all on together.

How do you answer the tough ones? 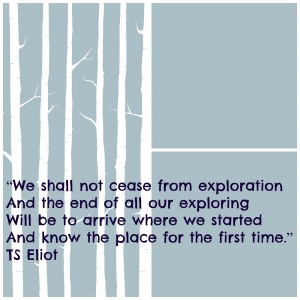 TS Eliot shared those words. It was a line in the last section of the phenomenal movie Philomena. About the search within and the search outside for a woman who lost her son – through adoption and then through death. I raced home from the movies – eager to find the quote and to stare at it for a while.

In the last month I have transcribed over 50000 words of my PhD interviews with families who have lost a child or a sibling or a partner. In standing back and looking at their words I was struck by how, no matter what was shared we came back to the same place time and time again. That to live with loss is to live with pain. That to hope for a future meant that that hope would be without a person that was so wanted.

In counselling there are many moments of searching. Many questions where people are looking for ways to live alongside their sadness. Not to push it to the past but to travel in a pattern where they can move parallel to what has happened – the moment we ask people to achieve closure or to move onwards we ask them to forget what brought them to their sadness in the first place. Ingrid Poulsen explained to me that she doesn’t need to read the newspaper or watch the news to know that evil exists in the world – whether we engage in the viewing or reading or consuming of it, it still continues on regardless. When something traumatic happens to us it shapes the way we view the world. The nightly news doesn’t have to remind us.

New Years is always full of resolutions – its just a by product of one year ending and the new one unfolding. My goal this year is to be more open to hearing the stories of the journeys we all take when we walk along our sadness. To not be consumed by all the awfulness that happens in the world – to know it exists without it filling my lounge room. To write more of those stories for others to hear because when we become consumed by only the reporting of the evil or the tips as to how we ‘get past’ them we fail to hear the other pieces that come with it – the resilience, the darkness, the moments of life and the way hope might begin to seep back in to peoples lives.

We can search for many things in life when something catastrophic happens but we will always come back to ourselves, back home, back to what we know. We just might have learnt a few more things along the way.

Happy New Year to all my lovely friends out there in the online and real world. Thank you for letting me walk alongside you.

I’ve only had one mentor in my working career. When we got to the third session I veered off into private world territory and they quickly reminded me we are not hear to talk about that. Safe to say session four didn’t get a look in.

When Nicola Roxon was announced as the Federal Attorney General a while back I expressed my admiration for her via twitter. The only response I received was from a friend correcting the spelling of Nicola’s surname. Nothing worse than promoting yourself as a writer that cant spell.

When Nicola announced her resignation I took to my phone wanting to express the same admiration but I couldn’t find the words. There are a lot of old woman in shopping centres reminding the parents who wander around in a daze that they grow up too soon. That the time spent teaching them the little things will move past in a blur and we will find ourselves telling the next generation to slow down, it moves too fast.

Working Mums Masterclass announced their mentor list for 2013 and my little picture takes pride of place on that page. Penny, who owns WMM, listened to the career I’d had and the experiences I’d survived as a mum and asked me to work with mums, to promote good mental health and to explore the challenges of teetering on the edge of that old chestnut, the work/life balance. To be honest the balance isn’t possible. Not just because of the multitude of responsibilities that pull us in every direction but because the playing field changes on a daily basis. We can’t balance out what we can’t predict, all we can do is learn some skills to develop resilience, to look after our minds and to find ways to move forward.

For me, when I first became a mum the work/life balance was non existent. I worked and then looked after my girl. There was little space for a life in between that and to be honest it was my saviour. My chance to be in the workforce, to be more me than I could be at home, to earn and provide for my daughter and to feel good that I was achieving even if it was just writing policy documents that would never see the light of day.

Fast forward five years and the arrival of my son saw me playing a whole different ball game. Acknowledging the busy-ness of the kids, the need to reassess my career and the teetering across the slippery slope of change pushed me out in to areas where some days it was more life than work and vice versa. It suits me to mix it up. I’m not on the see-saw anymore, I think I’m on that thing that spins so fast it takes a day for your eyes to adjust.

Nicola’s heartfelt speech, her acknowledging about how much time would be lost if things didn’t change was comforting and sad at the same time. I did think for a fleeting moment  but she’s has given up so much because the work that would have been required to get to the role would have been immense but on the flip-side the option to do what you love and be home for the good stuff is just as valid. Its also her playing field now, not forever.

Reaching out to people who recognise what playing field you are on, what you need to keep you out there or conversely what you need to take a break is what mentors do. Work/life balance gets thrown out there in most articles about women and careers. Balance doesn’t have to be a dirty word, it can be the key to making choices you never thought you had.

Have you ever had a mentor? Was it a positive experience?