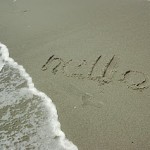 I was given the chance to write about the ways people living with an unresolved loss might be able to ‘reconnect’ with the people they had lost…the big challenge there was the ambiguous part of it all. I think a few people thought I was a bit odd writing about reconnecting with missing people, people who had vanished or people that had been murdered but we didnt know where the body was…in the writing and thinking process (well the copious coffee drinking process) I sat and spoke to a few people about their own experiences. One of the women told me that in order to reconnect with her brother (who had been missing for a long time) she wasnt going to go and sit on a park bench or stare out to the ocean like she thought she was supposed to. She was just going to take some time to remember the things he loved, that she’d find him in his CD’s, in thoughts of growing up, in the books he loved and that she find ways to be with him despite being without him.

A picnic is being held in Sydney today for people to reconnect with loved ones who have died…I was drawn to the beautiful picture in the paper of a silk installation blowing in the wind. The article shared the power of coming together in a community to reconnect but it also talked about those within certain cultures or faiths having access to rituals to help them acknowledge what was lost. It touched on the fact that for some without faith or socially constructed ways of grieving people might be Ãƒâ€šÃ‚Â ‘on their own’…it reminded me of the families of missing people I’ve worked with who might find themselves, in some circumstances, without culture or faith as well as without the access to rituals even if they wanted them – no funerals, no death notices, no public proclaimations that they had lost someone. Sometimes the only reminder of what was lost was an image on a ‘missing’ poster.

The idea of a picnic to introduce the dead back into the community is a way to provide ritual where ritual might be lost…but also a reminder that for those whose losses arent so clear cut – missing, miscarriage, illness, divorce – that we give everyone the space to say hello again* to a person, or connection, that is so sorely missed.

How do you say hello…again?